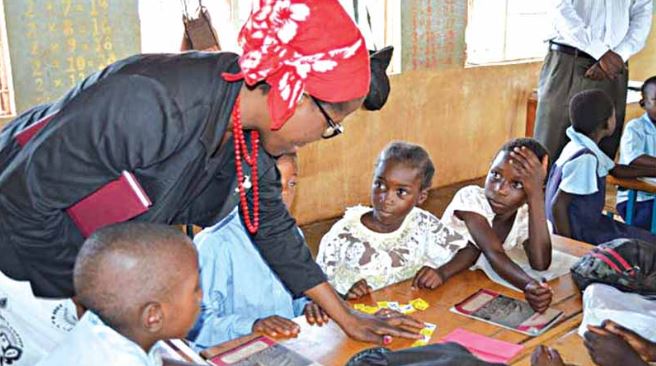 It said that the teachers embark on strike took effect after expiration of 21 days ultimatum given to the state government in July and additional 7 days ultimatum on Sept. 12.

The Bayelsa Chapter of Nigeria Union of Teachers embark (NUT) on Monday began; on indefinite strike over non-payment of N18,000 minimum wage arrears to members in the state.

This is contained in a statement signed and issued to newsmen in Yenagoa on Monday by; the Chairman of the Union in the state, Mr Kala-Ama John, and the Secretary, Mr Johnson Hector.

It said that the strike took effect after; expiration of 21 days ultimatum given to the state government in July and additional 7 days ultimatum on Sept. 12.

The News Agency of Nigeria (NAN), reports that the directive for the strike has grounded activities in both primary and secondary schools in the state who are; supposed to resume for the first term on Monday.

According to the statement, the strike became imperative given the state government’s inability to address the grievances over; non-payment of N18,000 minimum wage arrears to both secondary and primary schools teache

Also, we are aggrieved over; non-payment of backlog of salary arrears ranging from three and half to seven and half months to primary school teachers since; 2013.

“We also; observed acute shortage of teachers in both primary and secondary schools, non-provision of instructional materials to schools since September 2018 till date and other; lingering issues confronting the education system in the state.

“Consequently, the national body of the Nigeria Union of Teachers embark has; filed a trade dispute with Bayelsa government on the Sept. 6, 2019,” he said.

It noted that; the notice came with the directive that “until the outstanding salary arrears are paid; completely to both secondary and primary schools teachers, they should not resume work as; schools re-open on Sept. 23.

“Accordingly, the state wing executive council of the union hereby directs all primary and secondary school teachers in Bayelsa state to stay away from classes with immediate effect from Friday Sept. 20, 2019, until otherwise; directed,” it stated.

Effort to get the reaction of the State Commissioner for Education, Mr Jonathan Obuebite, was unsuccessful as he could not be reached for comment at; the time of this report.

Editor - November 24, 2020 0
The Schlumberger Foundation Faculty Scholarship Future Program 2020 This fellowship program is an opportunity for women who are from developing nations to study Ph.D. or...